Analysis of Cat, Bird, and Tree Life in a US Neighborhood 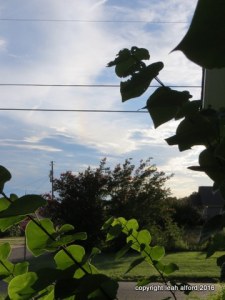 UPDATE: My book, (Volume 1) referred to later in this essay, is now available (click the link at the upper right for more info). It has an entire chapter devoted to the subject of cats and birds. It is even more deeply researched and I expand on careful and commonsense thought about the topic. In addition, I am thinking of writing  another photo essay on birds and cats for this website with research and thought that has occurred since the publication of the book in July, 2019. So stay tuned to this website!

We can see more sky now. There’s a sundog, a light wash of refracted color, in the first photo. We have known one neighborhood a long time. Our late elders moved here, first my Mom, my husband’s parents later. The two households had adjoining yards. We visited with them, watching the fauna. The entire city had a canopy of tall trees; on our block we had oaks, pines, pecans, and a magnolia.

Chirps, tweets, screes, and woodpecker taps sounded from the trees. Glimpses of the singers and tappers flashed high up in the branches, and mockingbirds flitted in the low shrubbery; the yards were always fluttering with birds. Squirrels and chipmunks scrambled everywhere. The bird feeder on the porch at my in-laws’ house stayed busy. Birds and small animals flourished, with cats walking around. I’ve always loved birds and cats and trees.

We saw owned cats roaming, or sitting in their yards, friendly abandoned strays, skittish ferals. Mom began taking in strays and ferals, making them indoor cats. We rehomed the overflow when Mom had enough kitties in house. My husband’s father took in Bud, the cat that now edits for me; Mom took in Bud’s feral momcat Anna, who is pictured in other posts on this website. 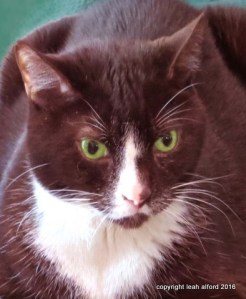 Still, more cats came. We’d taken in all the unowned friendly ones; owned friendly and feral standoffish kitties were always coming and going. After a few years a neighbor moved in down the street and started TNRing the ferals. Elder care eventually took over our time so we could no longer tame and place cats in homes. Outside cats walked up to the door to peer through the screen at Mom’s cats, and jumped her back fence to sniff her yard. The birds and small animals thrived. We lived there awhile, observing animal life “in the field”, every day. The city also had occasional hawks, owls, raccoons, and possums.

What did flat-line the populations of our charming wild fauna? The EF4 tornado of 2011. Instant deforestation. The tall trees around us all fell. Forest became prairie. One extremely battered pecan tree stood, and revived. Smaller understory trees, along with brushy vegetation, were blasted and scrubbed down, too. A few red tips and mimosas survived. I don’t know if birds were killed or if they knew to fly elsewhere.

Our decision to rebuild meant we stayed present in the half-mile wide track of flat. From our corner of the earth, we saw first-hand what deforestation does. Squirrels and chipmunks and most songbirds were gone. The geese from the lake increased, eating well from the grassy ground. Mice and rat numbers also soared. We saw only a few mockingbirds at first. Deforestation, sudden, natural, instantly witnessed, was the culprit. Human-caused deforestation is in my estimation, the biggest factor in species declines world-wide.

Feral cats were largely unseen for a long time. We saw some dart into the storm drains. They might have hidden amidst the debris, from all the noisy humans and machinery in the streets. Some may have fled the hit zones. Total disruption of neighborhood routine no doubt made them feel unsettled. A tabby cat stopped by we couldn’t approach. We got a quick photo, but he never came back. Cats had been left behind when owners fled wrecked houses that day. Volunteers, and a neighbor a few blocks away quickly began to help with lost, stray, and feral felines. Owners were located when possible, strays were taken in; when the scarce ferals did come back around, they were kept fed.

All remaining trees slowly grew higher, the lone pecan, the smaller “understory” trees, mimosas, red tips; the fig tree we’d had to trim back so we had a path to clear debris, grew tall. Over the last few years the birds have started coming back to the neighborhood! We hear birdsong again. Squirrels are slowly returning as the pecan tree resumes making pecans. 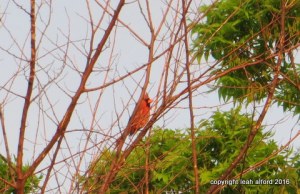 I love blackbirds! I once wrote an article about grackles that was published by a nature journal.

Coming back, but still shadows of former vegetation, they carry on:

Glorious mimosa, formerly of the understory

We also have these guys or gals. Maybe three or four ferals, not sure how many lovely cats are out there. We hope to take them all inside one day; you have to start the taming by feeding them. The birds came back stronger when the trees gained altitude. They came to a neighborhood that’s never been without a few outdoor kitties. The birds flourished over the 2016 summer, with the cats there. 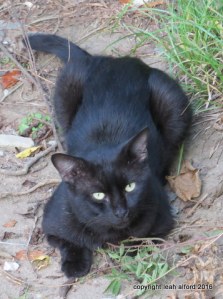 Unknown feral becoming friendlier, looking at me straight on

I’ve been watching and studying the dynamics of birds, cats, and other animals for many years. I’ve read widely about the fauna in the forest and city, and I know who eats birds and bird eggs. There’s a chapter about this in my book, now available (click link at upper right for more info); there will be more of my comparative studies of both small ecosystems in which I’ve lived. I also studied toxoplasmosis and rabies carefully. Volume 2 of my book will have expanded research and thought about those two zoonotic diseases. Hopefully that volume will be out next year.

Y’all can imagine just what I think about the book “Cat Wars” by Peter P. Marra and Chris Santella. I’ll only read it if the library gets it, I won’t support that. All of those studies saying cats kill such and such a number of birds are estimates, extrapolations, speculations. Unsound, imprecise science, to me. Raptors are protected species; some snatch small birds right out of the air. Other birds prey on bird eggs and nestlings. A study of how many birds are taken by other birds would be hard to nail down because the raiding raptors fly off; crow and jay predation takes place in nests high in trees. Public awareness of these incidents may be low because so many take place aloft, and/or shielded by leaves from human witnesses. We no longer talk about the gruesome side of avian activity! No online “buzz”, no “tweets”; though I expect if we could interpret realworld tweets (by birds), we’d find complaints about those freakin’ hawks! I’m also betting any accurate figure of birds taken by birds would be higher than the ‘birds taken by cats’ estimates.

In a variety of places we’ve lived, whenever cats have been few or absent, we’ve seen a spike in rodent numbers. No real surprise there. Rat and mice populations will soar if outdoor cats are ever killed off. Rats are also raiders of bird nests. Where neighborhoods have been leveled, meaning no more cat owners and their cats, rodents have shown up in homes bordering the cleared ground.

I love birds too. Deforestation and habitat loss are the real causes of declining bird numbers, along with other complex human-caused factors. There’s even human destruction of birds in many places for various reasons, one of which is crop consumption, as described in an article in the New York Times, America’s Wildlife Body Count, by Richard Conniff, September 17, 2016. I had trouble posting the link here within the text but it can be looked up. Or check out the first comment below where the link is posted.

ETA two months after I first posted, here’s an example of a bird kill by humans:

(Sorry, this link can no longer be found; that happens often on the Internet.)

I have to ask, why would my conclusions about various neighborhoods be dismissed as anecdotal evidence? I don’t have a degree in science but I’ve been reading and watching thoughtfully, for a long ole time. In essence, I’m out doing field work in two locations. Ornithologists make use of birds counts by amateurs, so why would my seasoned observations not be taken seriously?

West Nile Virus almost killed my husband a few years back. Birds are the major reservoir host. Mosquitoes vector the disease to humans, and are also reservoir hosts, but they acquire the infection from birds.

West Nile is a growing human health threat. Yet we’re not calling for the eradication of all free-flying birds. How horrible that sounds! Say it about all free-roaming cats, and it’s just as chilling.

The complex and IMO incompletely understood and described disease toxoplasmosis often gets tossed into any anti-outdoor-cat discussion without qualification. One fact is, it’s found in mammals other than cats, and in birds:

Cats are easy targets for the convenient blame-another-species approach to saving species. There’s bias at work here. And as much as I always worried about cats, my own indoor cats who may slip out and behave like ferals if captured, my ferals, the cats belonging to others, now I have increased anxiety. I fear that even more antipathy towards kitties may have been awakened by this misplaced blame. Bird advocates need to look at and study big picture dynamics of the natural world – who eats what or whom – along with in-depth study of diseases. Only complete understanding will lead to creating workable advantages for species in decline. People are influenced by what they read online; they need to examine and research extensively. Science reaches knowledge through a multitude of studies, not just a few. Everyone needs to take real and thoughtful notice of what’s going on around them every day. One of the best possible scenarios is when bird groups and cat groups work together. Talking together is best. That’s happened in some places, I hope it spreads and continues.

From Peter J. Wolf on Vox Felina, here’s a well thought out, research-heavy refutation of the book “Cat Wars”.

Link to return of cats to tornado zone story:

Yes, the editor of this piece is a cat but he’s fair-minded and understands that in any scientific investigation, you must gather evidence carefully before you draw and apply far-reaching conclusions. As you can see, this topic doesn’t sit well, he has a look of concern. (In actuality, he heard something outside when the picture was snapped.) 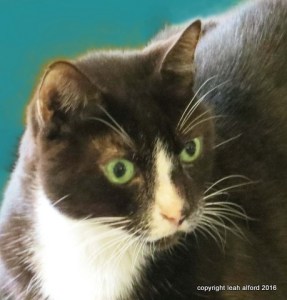 Bud the Editing Cat in a “hmmm” moment

36 Responses to Analysis of Cat, Bird, and Tree Life in a US Neighborhood