Looking mightily pleased with himself, climbing expert Franklin easily ascends to the top of an old speaker. He was inspired in this quest by squirrels on the roof.

He’s just packed with energy, the most active young cat we’ve ever encountered, and we’ve known a few. He’s getting into everything and he’s scary smart. One night after turning in, I heard cellophane rattling all over the kitchen floor. I had no doubt it was propelled by Franklin, so I got up, took an individually wrapped biscuit away from him, and stashed it away. I’m not sure he really wanted to eat it, since the ingredients were wheat and two kinds of nuts, but a few minutes later I heard the same sound. Getting up again, I took yet another biscuit from him. Now I knew he had a source, so I walked towards the computer table, where I expected my husband might have left the open box. I heard Franklin’s paw sounds making a fast dash to the place he’d knocked it to the floor; he knew exactly where he’d left his goodies and had come to prevent me from taking them. He’d also known to wait until we turned in before snagging these. Smooth! Opposable thumbs saved us from a night of noisy, crackling plastic. The cat did look crestfallen, and I felt bad about spoiling his fun. He has plenty of toy mice, though.

Frankie’s a twisty kitty! When we first got him in off the streets he was really thin. Now, still lithe and limber, he’s gaining weight fast.

Franklin replies, “Well how do ya think I got up here?!”

Franklin and his shadow survey his realm.

Frankie cools his heels after a day of vigorous exploration 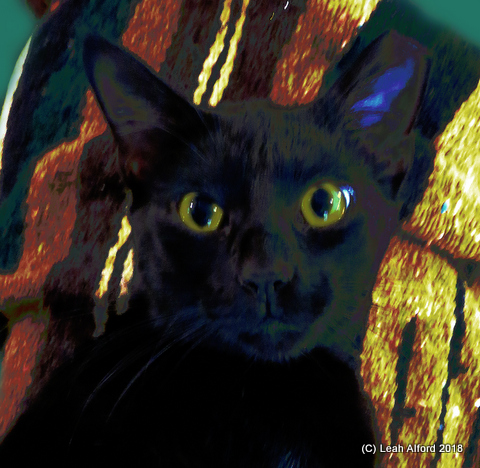 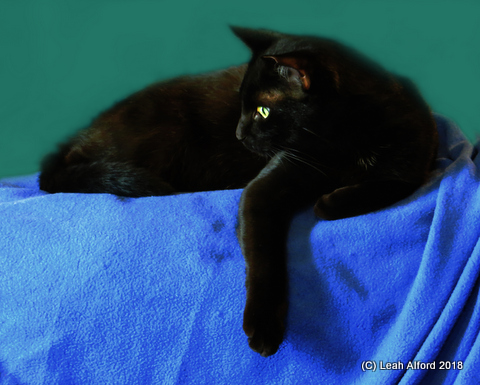 Even when resting, Franklin always knows what’s going on around him!

Franklin at rest, sort of

Franklin flexes that long, strong foreleg. It might be okay to settle down for a moment, he’s thinking.

I still miss this little Ultraviolet sprite, now at the Rainbow Bridge, so much. 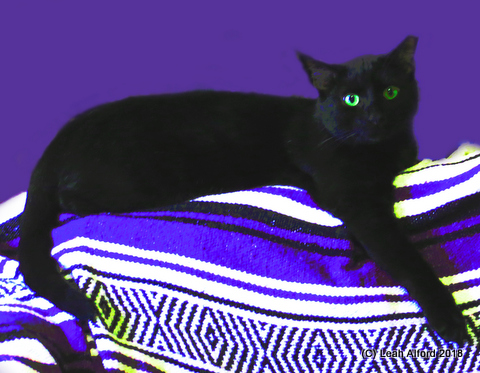 “It’s called a cameo appearance. I’ll explain later. And here’s another of you.”

I'm Leah T. Alford, a writer fascinated by the natural world and animals, especially cats.
View all posts by Catwoods →
This entry was posted in black cats, Cats and tagged black cats, cats. Bookmark the permalink.