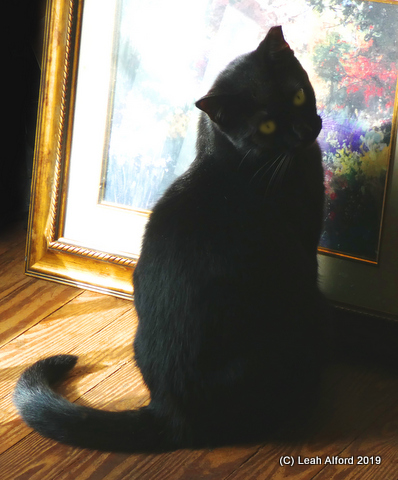 Franklin, who will one day live with the kittens.

I haven’t been around kittens in a long time. They’re in perpetual motion, hard to photograph. I asked the hubs one day, do you ever go in and find them all sleeping, you know, like cats do?

I’ve never seen a litter with quite this much variation. All do have gold eyes, but we have a range of coat colors, patterns, face shapes, and fur lengths.

Spooky, a girl, was caught by a friend a few weeks after Boss and Lynx. She’s one of the cutest little fluff-muffins I’ve ever seen, wearing her feral mom Groucho’s black and white tux. She’s named for her easily spooked nature. She had no fear of us and climbed up the hubs with the other kittens the first few weeks while Boss slapped at them all, and she enjoys untying my shoelaces. But she does not like to be petted or touched. I wonder if it’s just her feral heritage, or something neural. Since adopters usually favor outgoing kittens who don’t avoid being petted, we figured we’d need to keep her. I’ve seen her leaning up against Boss, and playing with all the other kittens. But at times while the other kittens play together, she sits in isolation, with a strange distant, un-engaged look about her. I figure she needs her siblings, they are a way towards contact with other beings. She might come around eventually and I’m willing to wait, or to be with her on her terms, always.

Stripey, another boy, and another girl were both caught by the hubs a week or so after Spooky. He’s a handsome mackerel tabby of the tawny sort, also sporting a tux he inherited from mom Groucho. He is actually the largest, weightiest of the kittens. He lies on his back and makes air biscuits, says the hubs. He’s friendly, big, and bold.

Moonpie, the other girl, is all black like Boss. She’s exquisite and dainty. It’s hard to tell them apart unless you see them together; Boss is near twice her size. In profile you can sometimes tell because her forehead is more prominent and rounded. Her face is not quite as elongated as his. She’s smaller than any of her siblings. She’s also darker than Boss, but that doesn’t always show in pictures. In comparison, Franklin has the deepest, darkest black fur of the three black cats now in our houses. There aren’t as many pictures of Moonpie because she’s been shy, slow to get used to our presence. But she can be petted now, and will jump into a lap.

For all Spooky’s odd reticence towards touch, and Moonpie’s general shyness, both girls are really adventurous and great at climbing.

Young Lynx at about 4 months. He’ll be big!

The two black kittens, Boss and Moonpie, have the long, slim faces that suggest modern Siamese heritage, and Bluto the feral tom also has this face shape. Sasquatch the feral tom has a rounder head shape and may have some Persian in him. Bluto is also black. I haven’t been close enough to Bluto to determine if he’s dark black like Franklin or black with tabby stripes like Boss and Moonpie. Black fur, of course, could also have come from Groucho the mom.

Same pic as in Part 1. Bluto doesn’t come often and my new pictures of him are still in the camera.

So, do we have two dads for this litter? Except for Lynx, the definite son of Sasquatch, I have no fixed opinion, I think it could be either way. Is Sasquatch the dad of Lynx, Spooky, and Stripey, and Bluto the dad of Boss and Moonpie? Do we have the sweet romance of Groucho and Sasquatch, or a flamboyant love triangle?

Boss wants to know everything!

My favorite picture yet of Boss. Because he is the friendliest and snuggliest, I have the most pictures of him.

I am a 5-way foster fail. I’m captivated by this whole kit’n’kaboodle. I can’t part with any of them. They all need their brothers and sisters. The town is full of spring kittens needing homes, sigh. So the eventual plan is to bring all 5 home. Will Franklin accept the kittens? He is strong-willed and territorial. He will need to be watched when we try to introduce them, after having kittens and Franklin in two separate rooms exchanging scents. He’s young and active and I think he will actually enjoy having other young cats to run and play with, once the initial fireworks are over.

At six months the kittens were all spayed and neutered. The boys went first, right as the news about Covid-19 was increasing. Before the shut-down orders, thankfully our vets were already doing everything remotely, you call upon arrival and place the carriers outside the door, a staff member comes out and picks up your cats, similar routine when you pick them back up; call and they bring out your cats (or dogs or other species). Later when we took the girls, the shut-down orders were in effect for some businesses, but vets were considered essential. I’m glad we were able to get all the kittens spayed and neutered under these circumstances. Unfortunately, we have not yet been able to get Sasquatch and Bluto TNRed. That’s going to have to wait. At least we’ve been able to get Groucho spayed. Bluto doesn’t come every day and he may be being fed by someone else. When he does come, he blinks at the hubs. His fur is growing back in on his nose and he’s right handsome.

Shelley was also a street kitten that we took in. She was adopted by our friend.

So if you’d like to order a book, click on the link at the upper right for Amazon, or check the “Buy Catwoods Online” link below the banner of Franklin to find links directly to the publisher at Borgo Publishing, or Ernest and Hadley Booksellers. If you are outside the US, email easty@ernestandhadleybooks.com and they will arrange to get your book to you. The cats and I appreciate it!